Do you want to live in a seaside mansion in the exclusive Fenwick Connecticut enclave? Katharine Hepburn did, and now you can too if you purchase her former home for just $28 million. 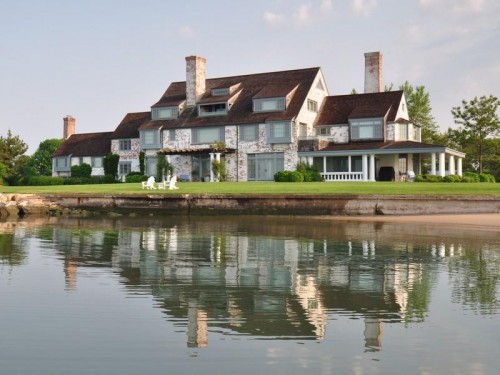 The news of today’s Holy Home comes to us through the Hartford Courant, who shares the news that millions of precious, economy-boosting dollars have been lovingly invested in bringing this home into a new glory:

A massive, multi-million dollar renovation pushed the limits of an extreme makeover of the 8,300-square-foot house, the centerpiece of the three-and-half acre estate on the shores of Long Island Sound.
…
Rooms have been combined to create larger, more open spaces. The kitchen is where part of the living room was. The living room is where the dining room was. A powder room, potting room and pantry now occupy the space where the old kitchen was.
…
The 3-story house, constructed in the English cottage style, was built with 21 rooms and nine bathrooms. The reconfiguration whittled down the rooms to 15, with 71/2 baths.
…
The renovations are buffered from the flooding that often plagued Hepburn. The house was raised 51/2 feet from its concrete slab, revealing more of the house from the bottom of the winding, pebbled driveway where once only chimneytops could be seen.
…
Few would dispute that the renovation has resulted in a beautiful home and grounds. The footprint of the house has not changed, with the exception of a wraparound patio. The flecked, white-washed exterior brick also remains unchanged.

May our Lady of Equity cause her face to shine upon the sellers for their heartfelt ministry to this house, its community, and indeed our entire nation.